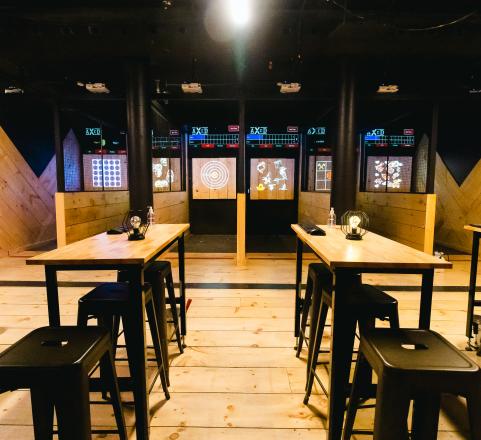 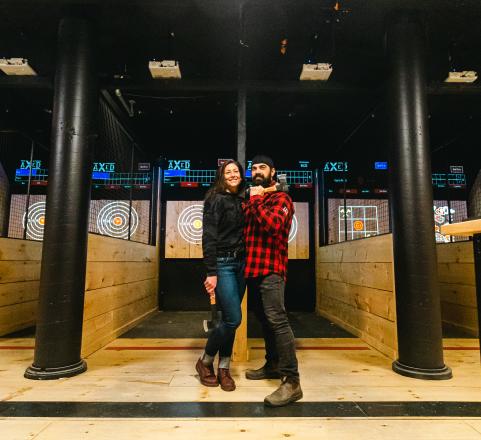 There was a time when axe throwing was reserved for lumberjack competitions, spaghetti Westerns and horror films. No longer—the popularity of axe throwing has skyrocked among young and old. In the case of AXED, an axed-throwing venue at Blue Mountain Village, customers range from four years old all the way to 86 years young.

Axe-throwing is a no-brainer

For Melissa Herod and husband John, opening an axe-throwing business was a no-brainer. “We went to a party at an axe-throwing spot in Toronto in 2014 and we left with smiles a mile wide,” remembers Melissa. “It was so much fun. On the way home we did some quick math and knew we had found a winner.”

Four years later they launched AXED, which started out with a mobile axe-throwing trailer at Creemore’s Fire, Beards & Axes, a Father’s Day festival. “It just took off from there,” says Melissa. “Demand never let up.” But the couple wanted to have a physical location, so they settled on Bruce Street in Thornbury.

A place to call home

Why Thornbury? Well, Melissa had become a competitive freestyle skier on the slopes at Beaver Valley Ski Club and John had enjoyed many weekends in the area. Both had independently decided that they wanted to end up right here. When they realized that they shared that ambition, it helped cement their relationship.

It just so happened that AXED was perfect for the area. “This is a four-season tourist destination close to the GTA,” observed Melissa. “While our long-term goal for AXED was always Blue Mountain Village, we realized you have to walk before you can run. Thornbury was the perfect place to develop the brand and find just the right formula. People come here to spend their money. They go to the Thornbury Bakery. They go to the Georgian Artisan Shop. And they came to AXED.”

With the pandemic in full swing, Melissa and John reluctantly closed the doors of Thornbury AXED in August of 2020. In the meantime, the AXED trailer had been making appearances at Blue Mountain Village since 2018. John and Melissa worked with the Blue Mountain Village Association for events and fundraisers, and with Blue Mountain Resorts for team building engagements. All the while, Melissa had been pushing for a bricks-and-mortar space in the Village, a dream that came to fruition in November, 2021.

“For a business like AXED, that’s a big win. And the first five weeks at Blue were awesome,” laughs Melissa, crossing her fingers and hoping for a quick end to COVID shutdowns in Ontario. As far as indoor recreation goes, AXED is front and centre in the Blue Mountain Village. It’s just about the only indoor activity that’s a great fit for a wide variety of groups.

The mainstay for AXED is visitors to the area. “I work  hard to support local businesses,” says Melissa. “Most of the food we eat is produced locally and we always try to make purchases at our local shops before looking elsewhere. But I recognize that we don’t have the population to float businesses like AXED without tourism.”

That’s not to say that AXED hasn’t received a warm welcome from the local business community. Melissa and John recently co-hosted an After 6 Event as part of the Town of The Blue Mountains Chamber of Commerce. They have made some important connections in the area, including ones that help promote their business. Last fall, they hosted a giveaway collaboration with iwa spa, Northwinds and Westin Hotels in which AXED added 250 Instagram followers in under 24 hours. Melissa and John also intend to grow their business locally, with plans for a membership program, a local axe-throwing league and special packages for local service clubs like Probus, Rotary and others.

While AXED has found its forever home at Blue Mountain Village, Melissa has some wisdom to share about opening a business in the Blue Mountains area. “The massive influx of people moving here creates a very unique opportunity,” she says, going on to explain that newcomers, coming from places with a plethora of services available to them, often don’t find the same services up here. “It’s a creative time,” she says. “Just look at this influx of people and think ‘where is there room here to create a niche and how do I go about doing that?’” That’s where you’ll find the gold.