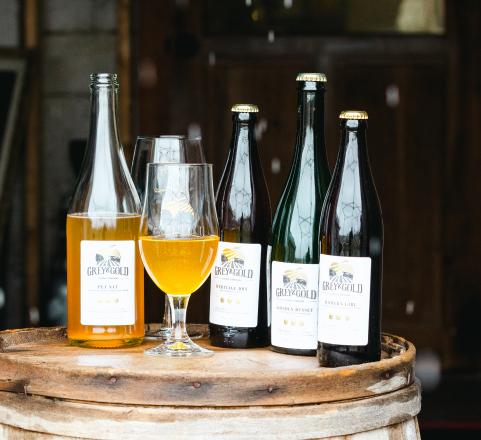 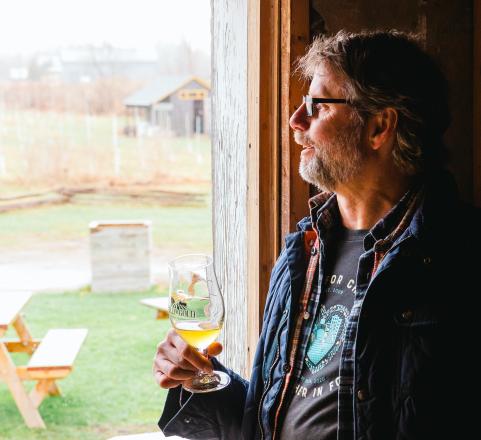 With names like Spruce of the Bruce and Modern Girl, the ciders that Grey & Gold produces have huge personality. Just like David Baker, the man who crafts them. He was hooked on cider about 10 years ago after tasting dry craft ciders at festivals around Toronto. More like white wine than sweet apple cider, his ciders are drier (less residual sugar) than just about anything you will find in the LCBO.

Bit by the cider bug

Baker got the cider bug, bigtime. He bought an apple grinder, built his own small press and began making cider at his home in Toronto. “I bought twenty used 20-litre carboys on Kijiji from a series of older European men, mostly forced to give up their winemaking hobby by their doctors and/or wives,” he writes at www.greyandgoldcider.com. Then, winning an award for a cider variety named Modern Girl, Baker decided to go commercial.

Dry craft cider has experienced a renaissance in recent years, with establishments like the former Beaver Valley Cidery and Spy Cider House & Distillery popping up in the Blue Mountains area, as well as many in Niagara and Prince Edward County. These ciders are in a completely different class from Thornbury Craft Cider, Duntroon Cider, Duxbury Cider and other popular ‘commercial’ ciders in the area.

“Most of the cider here in Ontario is made with seconds of dessert fruit—apples that aren’t pretty enough for the market,” explains Baker. “Like Galas, Honeycrisp, Macs and Delicious. To make a  cider with more complexity and structure, you need heritage varieties like Russet, Spy and Ida Red, as well as other North American, English and French bittersweet and bitter-sharp apples.” Baker says that the most bitter varieties are known as ‘spitters’, and for good reason. “Crab apples also work well. They have lots of sugar, but it’s balanced with lots of acid.”

A place to call home

Baker had been coming up to The Blue Mountains for some time. He skied here as a teenager and his mother made her Blue Mountains ski chalet her permanent home some 20 years ago. “When that happened it was my first time up here in seasons other than winter, my first time over to the other side of the mountain, the Beaver Valley,” recollects Baker. “I fell in love with the Bruce Trail, sailing, golf, cycling and of course cider – so many things that drew us to this area.”

Looking to transition out from behind a desk in Toronto, Baker and his wife Kim McLaren took a quick look at Prince Edward County before betting on family and the heritage of apple growing in Collingwood. The Bakers bought their nine-acre property on Grey Road 13 at the end of 2016.

Although the new cidery has a wide variety of apple trees in the ground, they are still quite young. The fruit that Baker uses for his cider comes from local growers like nearby Oaklane Orchards, but his most helpful neighbour is Bob Reid,  down the road at Maple Home Farms. Bob is in his 80s and manages a 200 acre mixed farm that includes apple orchards. In the winter, he plows all the driveways in the area. When Baker gets a delivery, Reid hustles down the hill in his tractor to do the unloading.

“I pay him,” says Baker, who has been able to defer a tractor purchase thanks to Reid, “but he’s not doing it for the money. He’s helping me out because he’s your classic old-school neighbour.”

Baker had first met Reid when he couldn’t find the right property for sale and approached him about renting some space. “There’s a five-acre rule,” says Baker. “Only growers can sell cider; you need at least five acres of fruit planted.” Most farms for sale in the area were 50 or 100 acres and I didn’t need that kind of acreage. “That’s where I came up with the idea of renting, he says. “Bob’s right on the bench, with a beautiful view.”

The space that Grey & Gold was lucky enough to find shortly thereafter forms part of what was once a 100-acre orchard, among the first in the valley. A certain Colonel Perkins used to process sweet cider as well as jellies, jams and pies in the same barn, which is over 150 years old. Baker also has the barn set up for cider making, with picnic tables and a fire pit outside for customers who care to sample the cider and enjoy the atmosphere before making their purchases at the bottle shop.

As you might guess, The Blue Mountains is at the epicentre of the Apple Pie Trail, a culinary adventure trail that brings together the many restaurants, cideries, orchards and adventure partners in the heart of apple country. Grey & Gold Cider is listed as a stop on the trail, which has proved a boon to business.

Local bars and restaurants have also inquired about carrying Grey & Gold, but just one actually does at time of writing: Heart’s Restaurant in Kimberley. “I’m very much into supporting local,” says Baker. “We will probably do more licensee business as we move out of the pandemic and ramp up production. I find that doing business here is just easy. People support each other, right from day one.”

To learn more, visit www.greyandgoldcider.com where you can find directions and bottle-shop hours.