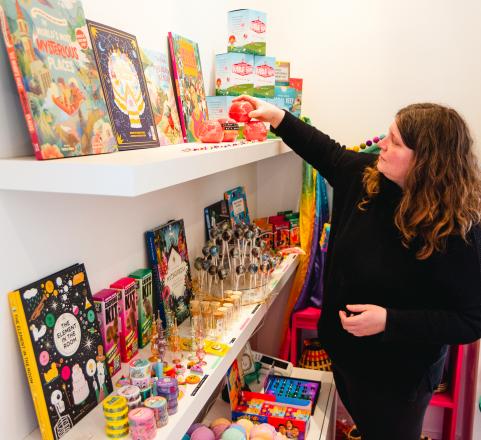 Clarksburg, sometimes referred to as ‘artsburg’, is where you would imagine a community art space thriving. It’s the art centre of the Blue Mountains region, home to art galleries, studios and the Marsh Street Centre, a hub for theatre and musical arts.

Yet there was no such community art space until 2017, when Ashley Green arrived. Ashley is an artist and teacher who lived the artist life in Toronto before teaching science, history, math, language and yes, art, across Canada, including over twenty-seven Indigenous communities from British Columbia to Nunavut.

Ashley moved back to her hometown with her young daughter in tow, to be closer to family and to create something that didn’t exist in the community—a space where the visual arts, primarily painting, can blossom and mature. Since then she has been building a solid foundation for budding artists in the region.

The Imagination Studio offers classes and workshops both in-studio and off-site for adults and children alike, indoors and outdoors in a day-camp format during the summer. Pre-pandemic, the studio offered PA day camps, travelling workshops and birthday parties, as well as welcoming school trips and holding sessions in area Montessori Schools and libraries. A few years ago, Ashley saw the entire Beaver Valley Community School cycle through The Imagination Studio over the course of several months.

While she hopes to get back to a full roster of programming soon, Ashley has continued to innovate, with offerings such as a Paddle-and-Paint canoe trip for adults in summer 2022.

Method behind the madness

The Imagination Studio art classes for adults start with a grounding in technique and progress from there. The programming that Ashley has developed for children inspires students to ‘tap into their creative potential, take risks, make mistakes and get messy.’ But that doesn’t mean it’s a free-for-all.

“I take kids who have zero experience with oil painting, give them instruction and the support they need and they create these beautiful works of art and feel really good about doing it,” she says. While Ashley agrees that art can be anything, that you can just express yourself, she finds that skill development is often given short shrift.

“Skills, techniques, understanding and the language around art—it’s like learning a musical instrument,” she says. “Anyone can pick one up and self-learn, but there are also whole sets of skills and methodologies that typically come along with learning a given instrument. You might call them shortcuts.”

Ashley is invested in teaching skills that kids would otherwise not really learn. “I didn’t even learn about a lot of this stuff from my painting classes in art school,” she says. “So that’s a distinguishing characteristic of what I do. I give kids a proper grounding for artistic achievement.”

While area galleries cater to tourists and weekenders, The Imagination Studio is all about locals. Most of her clients are families that moved up from the GTA, live here now and enrol their children in art classes, sometimes the whole family. That includes kids who come up for a chunk of time in the summer. “I’m here for the communities in The Blue Mountains,” she says simply.

Since The Imagination Studio relies on getting people together for art classes in order to operate, the pandemic has been challenging. While summer camps did run, outside—they always sell out—much in-studio programming went by the wayside. Things got so dire during first COVID 19 lockdown that The Imagination Studio came close to closing. A group of parents launched a GoFundMe campaign and in a few days the community had pitched in $10,000.

“I’m a working mom and I’m here for the families in the community who have invested in art for their kids over the years. They are the ones who have kept the studio alive,” says Ashley.

The relationships that she has built with her students is a testament to this. Ashley teaches oil painting to a core group of children and points to this as a major reason why her business is sustainable within the community.

“I’m so invested in building relationships with kids and fostering their creativity and making sure that they’ve been seen and heard and make art and are excited about things. So that’s kind of the grounding proof of why I’m still here.”

The Imagination Studio earns most of its revenue from students, workshops, parties and other activities, but it does work with the Municipality of Meaford’s Youth Program Committee, which subsidizes some programming. The studio also builds programming with the Thornbury Library, as well as those in Wasaga Beach and Elora.

“This beautiful art school keeps flourishing and people keep coming here,” marvels Ashley. It certainly is a cool space for people to expand and to grow. “I Want to see subsidization from the Town for kids whose parents can’t afford to put them in art classes,” says Ashley. “Everyone should have a chance to experience the magical world of art.