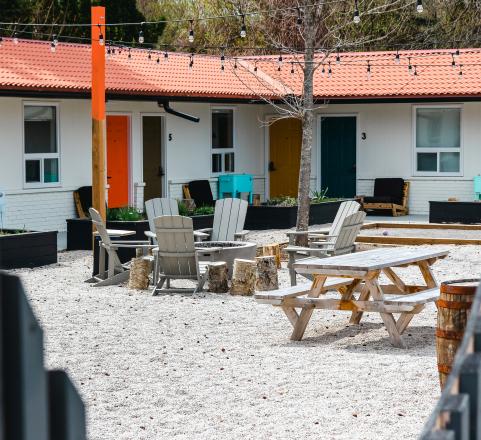 When John Belknap launched John & Sons Oyster House in Toronto’s financial district, the world was in the grips of a financial crisis. Some fourteen years later he repeated the pattern, launching a boutique motel/restaurant in The Blue Mountains in the midst of a pandemic.

“The best time to start things can be during the worst times,” says Belknap, in what could be a consciously Dickensian allusion to his very own Tale of Two Towns. “Having done John & Sons, it allowed me a little more flexibility in my thinking. I was able to keep moving forward despite the pandemic, instead of getting cold feet and dropping it.” Belknap had been visiting the area on weekends and holidays for most of his life, so he had no hesitation in drawing a tight circle around Collingwood/The Blue Mountains for his motel project.

A destination, not a pitstop.

Penny’s Motel wasn’t for sale when Belknap knocked on its door. But it fit the bill, so he approached the owner. “I was picturing something with a 1970s exterior and a luxurious, boutiquey interior. That was Penny’s, start to finish.” Penny’s is a Thornbury institution on the shoulder of Highway 26 just south of town. Belknap elected to preserve the motel’s iconic road sign (Penny’s / Since 1973) that promotes ‘Colour TV’ as a selling point. The motel has gone a good deal beyond colour TV just recently, with fully-remodelled King and Queen suites complete with gorgeous bedding, fluffy robes and the kind of décor you would expect from an upscale boho-chic country retreat.

The motel forecourt, or community area, is a sea of pea gravel with chopping-block seating clustered around firepits, insulated from the highway by an artful feature wall that Toronto artist Chad Wiseman crafted over the course of two months. With a rolling effect and painted all the colours of the area— salmon pinks, Georgian Bay blues, the greens and browns of nearby crags and forest—it’s a distinctive feature that immediately sets the property apart. Add a gorgeous, well-stocked bar/restaurant, a bocce ball court, the kind of patio you want to be seen on, and Penny’s is, as Belknap had hoped, “a destination, not a pit stop”.

Belknap readily admits that the tremendous success that Penny’s has become never would have happened in a vacuum. Like the Drake Motor Inn and The Lakeside Motel in Wellington, Prince Edward County, Penny’s success hinges to a large extent on what the immediate area holds.

“Thornbury was already a destination and we’re simply hoping to add to that,” says Belknap. “We’re only as good as our neighbours.” He points to Bruce Wine Bar, The Thornbury Bakery, Loved You Madly, Bread & Butter Co, Blu Thornbury and other establishments that make the area such a rich destination.

“Our guests eat and drink with us, but they are also out enjoying everything that this area has to offer. We want those good restaurants, bakeries, coffee shops and galleries. The more we work together, the better. If the restaurant runs out of beer, the Bruce Wine Bar folks will loan us cases till we get our next order in, no problem. It’s not about competition.”

The Penny’s crew felt welcomed into the Blue Mountains business community right away. Local roasters Good Grief and Ashanti supply their coffee and The Cheese Gallery does Penny’s-branded cheese boards. Trish and Dave Smith, the owners of the Thornbury Bakery, celebrated their anniversary with a stay at Penny’s. “People are more relaxed,” says Belknap. “I find that everyone is happy to be here. They enjoy being here. That shows up in how people relate.”

That helpful attitude extends to Town of Blue Mountains staff, adds Belknap. “They’ve always been there to help. Tim Hendry, Carling Fee– very supportive of Penny’s.” One day Belknap noticed that he was late with a property tax bill and called the Town. “‘No problem, tomorrow is fine’, they said. You don’t get that in Toronto, that personal rapport,” he said. “Opening the business was kind of seamless and the town was really supportive.”

Recently, Belknap has been connecting with local tourism companies to layer on services for Penny’s guests—things like helicopter tours, fly fishing and cidery visits. “And, of course, there’s skiing, snowshoeing and beautiful hikes in the winter; sailing, sunning and watersports in the summer,” he adds. “It’s the kind of place where you really can’t go wrong.”