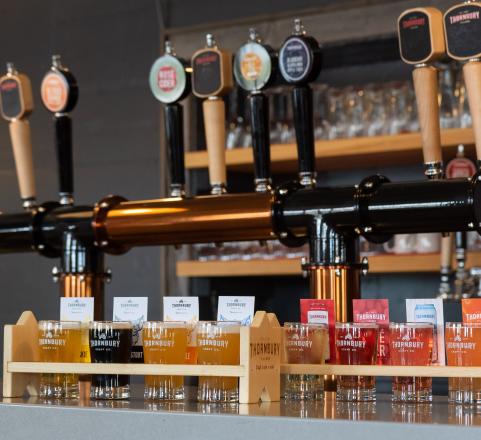 The Thornbury Craft Company’s prominent location on King Street East in Thornbury was originally a wooden apple storage building. Starting every September, it supplied trains with crates of apples destined for southern Ontario markets and beyond. Lost to a fire in the 1920s, it was rebuilt of thick concrete. It then served as an ammunition dump and an air raid shelter during World War II.

The old Georgian Bay Fruit Growers storage facility only came full circle back to apples in 2007, when the Thornbury Village Cidery opened its doors. A major renovation and expansion in 2017 yielded the building, tap room and patio that we enjoy today.

Thornbury Craft is a great apple story for the largest apple-growing region in Ontario. The company’s cider is undeniably delicious and still the #1-selling craft brand in the province. Thornbury Craft also produces a line of craft beers and sells wines bottled by its parent company, Colio Estate Wines, in its retail shop.

Despite cosmetic and production upgrades, Thornbury Craft still does many things in a way that’s, well, very traditional. “Golden Town Apple Products still presses juice from local apples for us, as they have for decades,” explains Derek Hammond, Thornbury Craft’s Retail and Hospitality Manager. “Once it’s pressed, we begin working with it the next day. Freshness like that makes a difference to taste.”

So does time, apparently. Making Thornbury Craft cider takes eight weeks, versus the industry standard of two weeks. “The end product justifies the way we do it,” says Derek. “But in today’s world that does make us really, really different.”

What makes Thornbury Craft different also distinguishes the area. “The local ski clubs will come to us and to area restaurants first, to work together,” says Derek. “I think that’s unique to this area. It’s not something you see in cities.” Thornbury Craft makes an effort to support local businesses, working with local Ontario hops and ordering supplies from the local Home Hardware rather than further afield. It’s behaviour that Derek sees a lot of in the area.

Before the lockdowns began, 60% to 65% of Thornbury Craft’s Taproom business was bar sales. Now sales are 60% to 70% retail. “Locals are making a concerted effort to come in and buy our products, of which we’re very appreciative,” says Derek. During the week is when Thornbury Craft sees a lot more locals, plus a core group that comes out to see area musicians perform on the weekends.

The pandemic has shown Thornbury Craft managers how much of their business is tourist traffic and just how important local relationships are. “Contact tracing over the past couple of years has shown the predominance of 647, 905 and 416 phone numbers rather than 519 or 705,” explains Derek. Tourists are crucial to Thornbury Craft’s business, but it’s the local community that provides vital sustenance during a downturn.

During the first lockdown, Thornbury Craft bought lunch for on-site staff, catered by a different local restaurant each day. “It was a win-win,” says Derek. “It gave business back to our partners, many of whom sell our products, and our employees didn’t have to worry about where to get lunch or increasing their risk of COVID exposure.”

In turn, local businesses book their holiday parties at Thornbury Craft and sell their beverages at their own establishments. “Yesterday, Scandinave Spa picked up an order of apple cider and beer for customer gift packages,” Derek notes. “For us, shop local goes both ways. It’s local people coming here and us supporting local businesses.” It’s for this reason that Thornbury Craft hasn’t installed a full kitchen; they prefer to support local restaurants and shops like the Thornbury Bakery. “Dave says we sell more sausage rolls than they do,” laughs Derek.

In many ways, and despite a recent influx of new residents from outside the south Georgian Bay area,  Thornbury is still very much a small town. “I think we’d like to keep that feel,” says Derek.